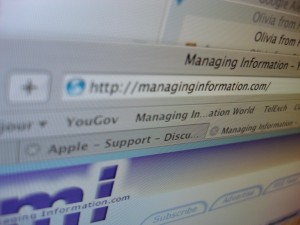 I’ll start by sharing a story: A few years ago, I got really caught up in the notion that I wanted to honor my civic duty and become a federal employee in order to become an active cog in the system with which I felt was plagued with inefficiencies and ineptitude.  Instead of being a person who merely complained about how bad the government was, but did nothing to change it, I decided I would be proactive and actually submit myself to work as a civil servant for the United States Government.

My initial job search started by looking in areas that played to my professional strengths, but also related to both my short and long-term career goals.  I have always had a passion for small businesses, so quite naturally, that led me to the Small Business Administration.  Because the agency is relatively small in terms of the number of offices it has throughout the country and the positions that are available, there typically weren’t many openings that were advertised, and when they were advertised, they tended to be in cities and states far away from where I was in Nashville.

So, taking to heart all of the information I had gathered from the tons of job search books I’d read, I took the initiative and decided to contact the local Nashville SBA Office, and talk to someone there, to perhaps get a better idea about their office and the hiring they might be looking to do in the near future.  Upon reviewing the site, I first decided to call someone that was listed under the position that I wanted to apply for.  I thought it would be a good idea to make a connection with someone who was in a job that I believed I wanted, plus I figured it would be a good idea to hear more about what they do, so that I could learn if the job was really for me.

When I called, I was able to reach the person that I was looking for, however what happened next in the conversation took me by surprise.  This person, asked my name.  And I told it to them.  Then, they asked me where I was from, and I mentioned it.  Then, oddly enough, they asked me for the spelling of my name, or specifically my last name, to check and see if I spelled “Cotton” in the traditional way, or if I spelled it with an “E”.  Ironically, I actually shared with them that my first name was the one that wasn’t spelled in the “traditional way”, as I told them it was “Kindra”, spelled with an “I”, instead of an “E”.  The conversation was taking a bit of a strange turn, so I tried steering it back towards the SBA and the position I was interested in, but this person was dogmatic in their pursuit of information about me.  So, they told me they’d Googled my name, and as such had found pages about all that I had been up to on the net over the past 5-10 years.  Most of that was my school work and a variety of work-related projects that I had worked on, and the majority of it was surely related to my two Masters degrees, neither of which had any relation to small businesses (at least not in any direct way).

On the phone, this person was fascinated with what they found out about me.  They were curious about the projects I worked out, what research I’d conducted, what were my findings, and all the things that I would have been more than happy to talk about in any other context, but being in job-search mode, especially in a job wouldn’t find direct value in these projects, I found this conversation to be ridiculously tedious!  And don’t get me wrong, I enjoy taking about my past work, and am always willing to share it with anyone interested, but I was rather perturbed once I saw that the ultimate aim of my call wasn’t going to be accomplished.  Eventually, my call to the Nashville SBA Office ended, and while I’m certain the caller was now at least superficially aware of the Issues and Challenges of Non-Traditional Students in Higher Education, that knowledge wasn’t going to benefit me in a way that would get me hired in their office.

That phone conversation was an eye-opener for me.  It was my unofficial introduction to Search Engine Optimization (SEO).  That conversation made me “Google myself” and see what search engines were saying about me.  Nothing I found there was overly fascinating, bad, nor anything I should have been concerned about, but what I did found didn’t really do a good job of explaining who I was TODAY, just who I had been.  Those results said nothing about what I was looking to gain by becoming a federal employee or working for the Small Business Administration.  In fact, the only mention of small businesses was in a list from my college of all of the graduates in my year, listed by major, which showed my Business Administration minor of Entrepreneurship.  I decided that day, to change that!

I had always been technically savvy and good with computers, but somehow, that savvyness hadn’t quite made it to the internet, in terms of the information that search engines knew about me.  Part of that was because I was, and still am to a large extent, a private person.  The MAJORITY of the information about me on the web at that time was put there because BY SOMEONE ELSE.  For that reason, the story being told was not only fragmented, but wholeheartedly incomplete.  I decided to rectify this by taking a few simple steps, that I’ll share with you here, and give the 5 tips that I believe every person should take to look more professional online (i.e. where the search engine spiders crawl):

These are steps that I give enthusiastically because they’re steps I’ve personally taken and can tell you THEY WORK!  Within three months of taking control of my own Search Engine Optimization (SEO), I changed the top search result for “Kindra Cotton”. Today, if you Google Me, you’ll find mostly information about me that I’ve put into search engines, and that information does paint a great picture about me and what I’ve been up to lately.  It’s a simple thing to do, it just takes a deliberate effort.  You can do it to, if you try.  Get in touch with me if you need some help figuring all this out.

Hope all this information was helpful.

Have a great day!

Any other tips for looking professional in the online arena?

Why You Should Google Me, Plus 5 Tips for Looking More Professional Online

Time and money are two things that are rarely in infinite supply, thus the following five (5) strategies are provided to show you How to Manage Social Media on a Limited Budget:

Step 1: Know Why You’re Using Social Media.  It’s best to have a clear vision as to why you’re using social media and know what objectives you hope to achieve in the social networking space (e.g. to listen, participate in, lead, and be guided by the invisible hand of digital social conversation).  Step one is a great time to review your Social Media Marketing Plan that lays out exactly how social media outlets will be used to drive traffic to your website/blog, generate interest in your content, produce leads for new customers, and provide ways to keep existing customers actively engaged through your social networking activities.  Doing so will ensure that you don’t waste the limited time and resources you do have “barking up the wrong social media tree”.

Step 2: Listen.  In real life, you’d rarely jump into a conversation in progress without taking the time to become well-versed in the topic being discussed.  The same principle applies when it comes to participating in social media.  In order to effectively gauge how you can provide useful content to the already overcrowded social media space, it is important to listen intently and purposefully to what’s been said about your brand, your industry, and your competitors, in addition to keeping up with the latest news and trends that may effect your long and short-term business planning.  Subscribe to your favorite publication’s RSS feeds using Google Reader.  Better yet, take the time now to review this brief tutorial to learn what RSS feeds are and how you can use them: http://youtu.be/f5lJ-fcDDAI

You can save yourself the time and energy of surfing the web, by bringing the web to use via RSS feeds, which can deliver the top news that you’re actually interested in.  The last part of the listening step is to set up Google Alerts and Social Mention for you, your company, and other relevant keywords that can help you keep your finger on the pulse of what’s been said on the web and via social networks.

Step 3: Use Your Tools Wisely.  Trying to manage several social media sites as one person or a small department can certainly become a cumbersome chore, especially after you’ve incorporated 2 or more outlets.  Great tools like Tweetdeck and HootSuite provide excellent ways to monitor your social networks in a column-based format, which you’ll find particularly helpful for managing multiple streams of information.  Tweetdeck is a free application that you can download and install on your computer/mobile device, whereas HootSuite is a web-based application that offers similar functionality through both free and low-cost versions.  As with most things, the paid version of HootSuite offers more extras, but you should only consider these extras if you can see where you can derive a direct business utility from them.  This blog post talks more about HootSuite Pro (the paid version) and gives a bit more information about it.

Step 4: Learn From the Story Your Analytics Are Telling You.  Review the web analytics for your website or blog and look at what they tell you about your content and your site design.  Specifically, look at where your traffic is coming from and what keywords and phrases people are searching for to get to your site.  Note which pages/posts people visit most often and how much time they spend there.  This can help you as you re-design your site, or it can aid when you look for new content to create.

Step 5: Survey Your Customers.  At some point, you will want to take a direct assessment of how we’ll you’re doing from your customers.  Provide a brief 3-5 question survey to find out how what you’re doing right, where you can make improvements, and what suggestions or questions your customers may have.  It’s a great way to get feedback and let your customers know you’re focused on meeting their needs.  (Please take a few moments to fill out our brief survey).

Performing each of these tasks takes a dedicated effort, however once you get the hang of how all these steps work in conjunction together and how you can use tech tools available to make your time more productive, you’ll find that managing social media on a limited budget is a lot easier than you think.

What tips or tricks do you have for managing social media on a limited budget?