Tonight, when I did my evening peek into the "real news network" that is Twitter, I came across this:

A brief search down my timeline revealed what some considered to be a "joke" sent from the official account of Federal Student AID (an office of the U.S. Dept. of Education that provides grants, loans, and work-study funds for college) that reads: "If this is you, you better fill out your FAFSA: fafsa.gov", followed by an edited screen capture from the movie "Bridesmaids" that says "Help me. I'm poor" under Kristen Wiig's character: 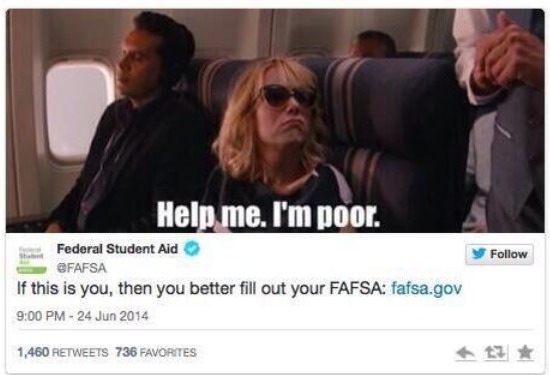 The post was retweeted more than 1400 times and favorited over 700 times on Twitter before it was deleted.  As of 11PM CT, it's still listed as a photo in their Photo Album on their Facebook Page (Update: They deleted it sometime after midnight, but we've included a screen capture of it at the bottom of this post).  The best tweet I saw came from Lauren D. Thomas (Engineering Education Researcher/PhD/Practitioner. STEM Ed #GameChanger):

Others on Twitter displayed their unhappiness with this official social media outlet of a federal agency too via the #AskFAFSA hashtag: 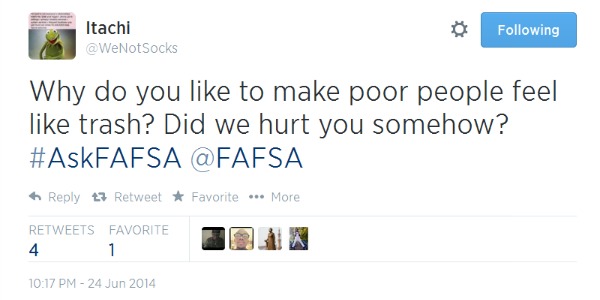 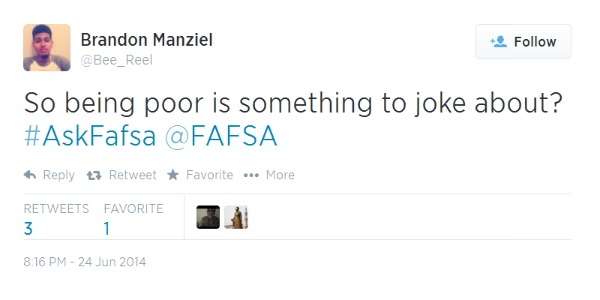 You can follow the #AskFAFSA hashtag on Twitter to see other's reactions and the FAFSA response (which hasn't come as of midnight ET tonight): https://twitter.com/hashtag/AskFAFSA?src=hash

The last official tweet before FAFSA's deleted poverty mocking tweet encourages users to interact with them via the #AskFAFSA hashtag.  Should this story pick up tomorrow, under the bright day's sun and "Hump Day Hubbub" the folks over at Federal Student Aid may be in for more than they bargained for!  Currently, they're advertising an #AskFAFSA Office Hours at 5PM on June 25th, and I'd encourage everyone offended by their tweet to #AskFAFSA why they think it's okay to make fun of the poor?!

Whomever is behind this "let's make fun of poor people" campaign needs to be held accountable, and since I'm a concerned taxpayer, I want answers and I'm going to go see if I can find some by contacting FAFSA directly.  As a former federal employee and tax payer, I'm angered at the government's lackadaisical social media policy, if one exists, and the recklessness with which they allow their employees to tweet on their behalf.  Making fun of the poor is not funny, and it especially shouldn't come from government employees, acting in an official capacity on the taxpayer's dime!

As a Social Media Specialist, this also makes me shake my head in disgust because it highlights an issue that many organizational leaders just don't get (until it's too late, since many prefer to be REACTIVE, rather than PROACTIVE), and that is: HIRE A TRAINED PROFESSIONAL TO MANAGE YOUR SOCIAL MEDIA!  And yes, in this day and age where "everyone has a smartphone" and a Facebook account, some will mockingly suggest that "anyone can manage your social media", but we see, in times like this, as well as with other failures like United Airline's recent flub with sending an X-rated photo to its followers, that not just anyone can or should be in charge of your social media marketing!

I like to use the analogy that putting someone in charge of your social media because they're "young" (based on the presumption that they "get technology" simply because they are young), is the equivalent of putting a newly minted 16 year old driver behind the wheel of an 18-wheeler truck!  Yes, they've been taught to drive, but they're not ready to handing an 18-wheeler, and when you use social media on behalf of a BUSINESS, you're dealing with a TRUCK and not a MiniCooper!  There's more at stake and more on the line for organizations and businesses, and as such, they need to be more proactive to protect their name and their brand from senseless acts of recklessness like this FAFSA poverty mock, which can be easily avoided with the proper Social Media Policy in place and a Social Media Marketing Plan.

Now, I'm going to do my best to get in touch with some folks at Federal Student Aid, and for those that want more information about FAFSA (Federal Student Aid) (a performance-based organization in charge of awarding approximately $137 billion dollars of your tax money), here are some key folks in charge:

So to recap: Don't mock the least vulnerable among us while trying to be pithy on the web!

Note: At 11:54PM CT FAFSA posted an apology tweet and later deleted the image from their Facebook album (though you can see a screen capture of it below).  This isn't good enough for me.  I'd like to see their Social Media Policy, and learn about their department's training for employees that manage and monitor these accounts to make sure this doesn't happen again!  As a taxpayer, I have the right to request this information.  I'll report back later with what I find! 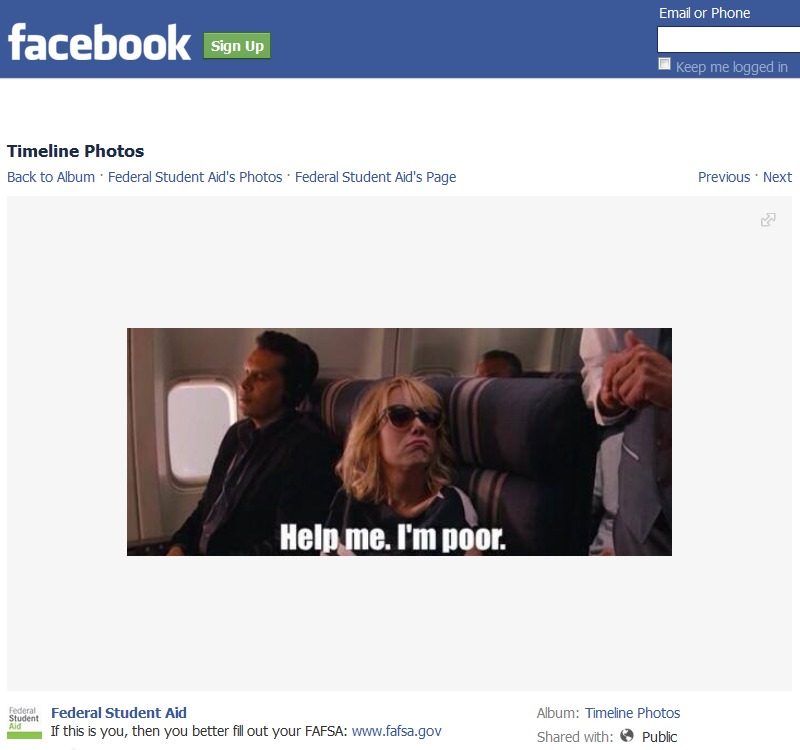 SSS for Success (Simplified Social Media Solutions) is in search of new Success Stories!  We’re looking for organizations who are willing to have their social media marketing efforts documented in exchange for a discounted rate of products and services, so that we can have the opportunity to showcase our talents and help propel your brand to the next level with new media!  Specifically, we’re interested in organizations in the following industries:

In order to take advantage of this Call for Case Studies, you must:

Get started now by filling out our intake form.

We can't wait to work with you!

Social media is evolving and how people use it is changing too.  In order to keep up with this changing landscape, we're updating the products and services we offer, and providing a better array of items that are in-demand and much needed by our audience like Email Marketing Maintenance.

Here’s a rundown of some of the changes to come:

As these changes get underway, you'll notice some changes on our website, an upgrade to your mobile web experience, and the introduction of a mobile app to help service you better.  In the meantime, stay tuned to our news updates by subscribing our newsletter.  We’re excited about this new direction, and hope you are too!  So, how’s your social media marketing going?